My good friend Miranda was telling me that I am actually part of an artistic cannon of nude bike riders from New York, but I can't find any other information on it. I got in THE local papers online version. Brisbane only has one daily local newspaper that you pay for. Unfortunately I was trying to promote a show at Metro Arts, but the article was all about me and hardly mentioned the show at all.

Here is some text: 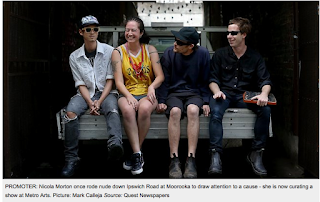 AN ARTIST who staged a nude bike ride along one of Brisbane's main roads is keeping her clothes on for her latest project.

Nicola Morton of Moorooka posted a video of the stunt on YouTube in November which showed herself and another woman removing their clothes down to their underpants before they set off on the ride. Sightings of the pair sent the Queensland Police Service's Facebook page into overdrive on November 24 after the duo were seen riding along Ipswich Rd at Moorooka around 9pm.

Ms Morton said the ride was to promote a performance by a fellow artist and to raise awareness of cyclists. ''I wanted to raise public dialogue about biking,'' she said. Ms Morton and her friend were spoken to by police on the night but were released without charge. ''It was good that everything went
without a hitch and we managed to do the (Moorooka Magic) Mile and the police let us go,'' she said.

''It's also about having fun.'' Ms Morton wouldn't rule out doing something similar in future, but for now is curating an art show at Metro Arts in the city on Friday. ''It's about taking people to places where they have to delve into imaginary landscapes, being able to suspend all your judgments and walk into this separate theatre where there are ghouls and goblins,'' she said. It features a band playing on the back of a ute and a webcam surveillance installation showing live footage of the event.

''It's a general art exhibition crowd that are going to come along. I hope the general public will come along too because that's a little bit more exciting for us.''

If you want to make a comment here is the link http://www.couriermail.com.au/news/nude-bike-rider-nicola-morton-stages-new-show-promising-to-keep-her-clothes-on-this-time/story-e6freon6-1226633243989?from=public_rss