This performance transforms the energy from dysfunctional family roles and the influence of 'psychedelic' hippy siblings into a multiplicity of healing roles from our new community - contemporary post-modern popular culture.

Problem: Dysfunctional families generate different archetypes amongst the children such as the 'family hero,' 'scapegoat,' 'mascot' and the 'lost child.' Combined with these roles our siblings have been products of the 70's pyschedelic hippy generation where their individual pursuit of happiness has become a tool for the 'psychedelic' manipulations of capitalism. We tackle personal symbols of our dysfunctional roles (which are mostly also rooted in 'psychedelic uprising') and represent new multiplicity where we can functionally play all the roles and do not succumb to individualisation of identity and become new social healers.

In Part 1 - All Apologies Nirvana v Eminem v Bon Jovi; Deepak Chopra v 'The Subaltern' Spivak v Noam Chomsky v Deleuze & Guattari v Tennessee Williams
In Part 2 - Simbi sings her own electroclash song over footage from 'Dirty Dancing' and Nicola becomes a comic book super hero aka. Rougue or Storm from X-men and sings New World Order by Ministry over Simbi being the fairy queen playing the piano and then becomes a graffitti-ing Punisher over footage from 'Rebel Without A Cause.
In Part 3 - Simbi and Nicola make a noise jam over the top of Brian Jonestown Massacre, during the show the footage was projected on us, so we actually weren't making music to the footage but I think it goes pretty well. 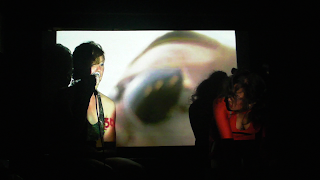 
Swamp of ghosts and basement holes
where fire and torture pull us into the mire
My mother's an enormous octopus who oozes tears
My father changes the channel -- one more rape, one more fear

Do you feel insecure? Take it out on me, I'm so very pure
I"ll love you endlessly. In the end I'll even set you free.

My wrists are blood and my lips sewn shut
The leaves change color one more year.
My dreams and visions take me out of here.

Cocoon of music
I wove you with agile fingers and fragile feelings.
Every color of the rainbow soft around me
like dewdrops on fresh flowers.
But I must destroy you
to find my powers.

Do you feel insecure? Take it out on me, I'm so very pure.
I'll love you endlessly. In the end, I'll even set me free.

Dressed in kimono
Lying on the bed
Oragami bats are overhead.

On a ship
On a trip
this imp is wearing my rainbow dress
I'm wearing his combat boots. Awkward but strange
how well they suit.
He wants to break me down, take me power.
But as usual my words win him over.

I tell him the story of the quilombo in Brazil
where children of escaped slaves are living still
How I scrambled below the waterfall
and breathed deep pure air.
Saw pink river dolphins.
I found my home there.

Goodbye to all my magic styles
gained entrance to every club in new york and berlin through those psychic wiles
Naked I sat clothed in my skin
No tricks, no shadows, no projected ideals
Simply me and all that surrounded me

Together we could be
broken harmony