An experiment with Datura and creating a utopia that doesn't exist and my failed dating rites.
Here Is the video I gave Andrew Wilson to solve

Starts like a romantic comedy, ends…
A normal weekend at herringbone where we do our I Ching sticks, the song that is playing is very important to sian coz she always mentions it when she tells the story (its Boys II Men), I don't remember the song but then she rubs her hands together and says, "the next man that walks in will be nicola's husband". We all secretly think it will be an ugly fat guy but in walks the hottest guy I've ever seen. He has a beard, but then I worry that he is German, because I find those germs so good looking but they really aren't for me. Score! I talk to this guy. He is from nz, likes bright colours, button cuff and has distinct style. This guy is made for me, he puts our navy sports jacket and light blue chinos on hold, he buys a yellow shirt. I love yellow. I put his hold under the name, "nicola's husband"
Next week, He comes back when im on my lunchbreak but has to come back coz there is a fault in the jacket. This time when he comes in I subtly offer him my staff discount, “Coz you seem cool, and my friends never buy anything from here.” He is damn good looking. I have googled him and he has a phd in maths and works in social research. He comes in during the last half hour, I’m at work late on my own. I should have shut the shop half an hour ago, but i stay to chat, i have my bike anyway and cant go on the train, i mention i have problems with authority, He mentions he got a ticket riding his bike thru the mall, are we soulmates???
He has to wait on one of the shirts, it takes 2 weeks to come. He comes in twice looking for me, my workmates leave suggestive messages for me to call him. He finally comes in late again, this time it's a Friday night, Sian is working with me and tries to angle the conversation towards a date. He talks about how he is going to Good Vibrations and what acts he is interested in seeing there, I talk about how last Good Vibrations I saw James Brown, Dee-Lite, Talib Kweli etc. According to Sian, we have broken “Band-Ice” He even talks about a band on tonight at the Press Club but I just can’t take the bait, I am seriously tired. Instead Sian and I talk about our costume party on Saturday night, he suggests we go as an octopus. But we fumbled that conversation, we were both so awkward, maybe I secretly love Sian J
Talking to every male I encountered on the weekend, it became more and more apparent that I fucked up and I needed to text him real soon if I don’t want to sound obsessive. Sian and I wanted to call, but in the end the males said “TEXT!” So I did, I made Kurt help me write the text, I sometimes have trouble keeping to the point. Then I didn’t hear back from him, I turned off the phone. Next day, I turn on phone and realise I texted the wrong Will in my phone. Poor other Will was a bit confused because we had a little history – he wasn’t sure how to interpret the text 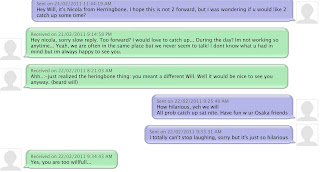 The funny thing, is that they both have fantastic beards. So then of course I texted the right Will and he was keen to catch up, he remembered I had a thing for the Fig Daiquiris at La Rouche. And then…
Well that morning I ran into an old woman who last time I saw her, told me I would meet someone that I would fall in love with, and to not despair, I am not too old. She also instructed me on massaging my hands with olive oil to keep them looking young. This time she was dressed in all white with a veil!?!!? And we talked about marriage because I had a huge deep fryer on my lap, it was my gift for my Nephew’s wedding. She thought it was horrible that someone so young could get married. But she told me I was wise, and maybe she would have told me about my husband but then it was my stop.
So Friday night, rocks up, he is late. I am super nervous. All week it has been stormy and I have been dreaming of his handsomeness. Things go ok, we talk about our weekends and he talks about latin music, he is a drummer. Ok so good.. but.. I soon discover Latin music is all about the rules, the maths rules, this guy is structuralist and likes his gender roles ruled by nature. He thinks female journalists should not complain about how other males treat/question females in the media, unless they can offer a fixed solution - if they are just treating/questioning “how women are” then what do they have to complain about. CNN needs to know what Condaleesa Rice thinks of white weddings and ladies will just sit tight when verbally abused on the sports field. Maybe I am a little sensitive, but the conversation continues, I almost run away but then decide we can cope with a meal. But then comes more damned conversation. This time its “what society needs is wholesomeness,” “those reality TV shows where they take kids to the bush is where it’s at,” “hedonism and drug taking needs to be disciplined,” “jogging is a sign of evolution,” “hedonism is acting like an animal” WHOAH. 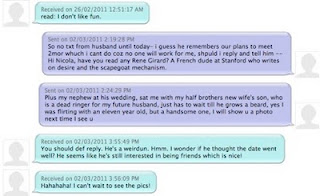 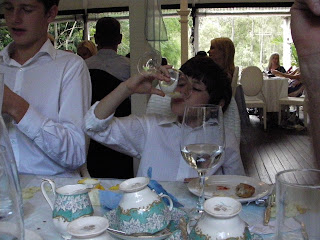 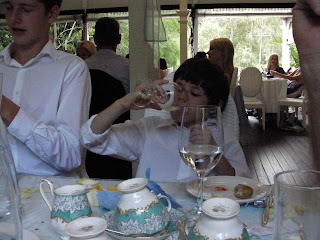 YES! HE IS STILL KEEN. But no, we are both too busy to meet and both going overseas soon. We probably won’t see each other for 5 months. Or for ever. Fate?