Challenges: How does one recognise an intelligent energy being?


Results:
On January 15th 2010 we finally created an energy being of alternative intelligence, who to prove its existence, manifested in the Zoom H2 Digital Audio Recorder.

Previous Trials:
At Tacheles, Berlin about 60 people tried to make an alternative spider intelligence. Amazed largely by the concept of artificial intelligence creation and mystified as to why I was tying tape around them, they finally got the message and fervently joined in our word touch association game. We talked a lot about 90's and grunge music and maybe got a little bit obsessed with talking drugs. The large challenge here was that no one knew what I was going to do, and ironically remembered me for falling off the stage whilst performing at Wasted Festival, Transmediale 2007. But everyone will now remember me for introducing them to Hide, the Japanese Glam Rock Star. 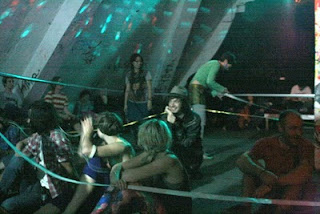 Photo By Ve Mac
At White Rabbit about 20 people witnessed the next invocation of the spider intelligence. This time I had instruments to create an extended sensory arsenal touch and sound, together with our cognitive mind mapping and word association. The crazy recycled horns were a definite hit. In retrospect, I think I had made them look too much like jewelry.

At Ptarmigan to about 50 people I took the spider intelligence calling to a whole new level. I had the whole month in residence to prepare and decked out the gallery space with all kinds of musical instruments that I thought could bring out more interactions and synaptic connections – pipes, marimbas, chimes, dishracks. I even made T-shirts. Everyone loved the horns and other room instruments and played them during the whole performance, creating much better sound-word interaction than ever before. The audience was very enthusiastic and really helpful in trying to bring the intelligence out. Words were shouted, sounds and hands were bound all over the place. I also introduced the use of another language apart from English and Japanese, Latin. I was really close tonight, I could feel it. 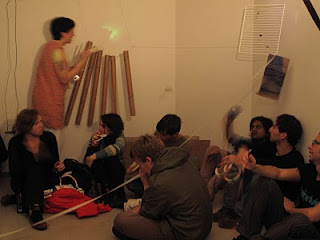 At Discobeans, I got majorly distracted and the large piece of word association ended being about how hot the day had been. A few people had a go at the horns, and I got 8 eyes drawn on me. There were no audible results on the Zoom recorder (embedded here) 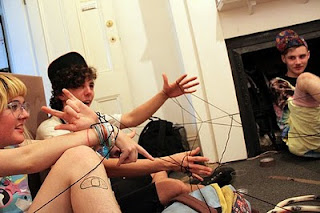 Photo by Holly Fluxx
The Successful Trial:
At Exist-ence, I was playing to my home town, everyone was prepared and I decided to introduce the sense of smell. The audience was very responsive and we didn't get off track. It was similar to the Ptarmigan performance and I finally ran out of my washing machine pipe horns. The danger-oil-water-flame-coriander- association even set off the fire alarm. The connection to the
Emergency Services Network tipped our critical mass of
neurotransmission. The evidence that was waiting for me, I didn't find until July, when I finally went through my documentation.

The tape was left recording after the performance at Existence – shortly after Alan left, a presence entered the tape machine, you can hear it for yourself. It is a true artefact. It is the intelligence we had been trying to create for the last 45 minutes. Powered by our synaptic communion and interaction around the theme of 'Spiders,' we created an AI that wished to make itself known.

Proof of Artificiial Intelligence & Time Travel from nicola morton on Vimeo. Further Questions: Does this being exist materially in another dimension? If so, how do we get there... 2) Results Published on Time Travel
Date: 20 July 2010 (nr Winter Solistice)
Venue: Tidy Kid Space, Brisbane Australia
Attendants: 35
Hypothesis: Travel through other times and dimensions is possible and can rewrite our past and future.

Last night I attempted to enter the fourth dimension.

Assumptions: Time is not homogenous. Time is not linear. Time travel subsists of our phenomenal perception/s of other times/dimensions.

I accompanied my time travel with a cinematic projection of a time/space where I developed my shamanic power (Asheville, USA). The recording of moving time, and time itself being moved was the medium for our time travel. We channel the creative force of Om to cleanse and charge us.

In the performance I had to admit that for the second half of my hypothesis my intentions were personal,

• I wanted to rewrite my past, not just in my mind but also in other peoples (and their preconceptions) plus somehow affect the technology that recorded it.

• I wanted to start exploring the future

• Why? My life was alerting me to repetition, habit and involuntary memory. Time is not linear. I kept on experiencing nostalgic time loops, I felt like I was reliving time by travelling across the same routes to the same destinations, experiencing the same sensations in a different time and re-encountering demons I thought I had slain. I thought I was falsely experiencing Nietzsche’s rebirth (hence the reading of Sylvia Plath’s “Lady Lazarus” and Arthur Rimbaud‘s “Jadis, Si je me souviens bien” (Once, if my memory serves me well).

• I wanted these trajectories into the past to not affect my progress into the future. I found some power in cleansing rituals, but I realised what I wanted to do was not cleanse but tidy. I wanted to tidy up my past and future, add a few words, rewrite it, culminating in the final statement “My debt is paid”


The first jaunt into space I passed around my diary, which contained a drawing of a diagram that appeared to me during one restless night in New York where I was working on equations for time travel. I was adding, subtracting hope and redemption to the past and the future, multiplying that into the future and dividing by probability.


I see the carpet is no longer blue but green. We first hear the sound of keys, it is a Rhinoceros. The Rhinoceros follows us everywhere we go making that noise. The Rhinoceros actually flies. How can something so big fly? There are more animals here, and a very loud noise of Marimbas (but the noise comes from a machine). A wolf makes tinkling sounds while it sleeps. We do not wake it, but come across a giant fruit loop but its organic, made from organic raw sugar and natural flavours, a treat from the Gods. Is there a river of soy as well? No, this is not heaven, there is a river of Cocaine. Or is this Paradise? The carpet is green still, so is my dress. It came from Sweden, the group now wants to go to Sweden, but I can smell the brewery, not ready to leave the space here, we do not have time and have to go back.

On our second attempt, I pass around photos of my mother, she turns 77 on 20/12/2012. I invite Rin Healy to take us to Sweden. We had been in Sweden together in the past. I could smell Hot Cross Buns. They were being baked by Moto X Riders, The Machine makes that loud marimba sound again. The Moto X Riders are more like Roly- Poly, but then all of a sudden they are fucking each other its Sodomy and I feel like I'm in Rome. I want to go to the future.

Future smells like Jasmine, main street but there is no street but a mainstream. There is a faint smell of lavender from the side. There is a meow from a robot cat, everyone is quiet in the future, because we are scared. I want to pat the robot cat. The robot cat feels like honey, is it actually a hologram my hand goes right through it, but I was told it’s a robot cat, I hear you can get high from a cat lick. The Cat licks Akiko, she sees a Dog in a tuxedo, she has gone to another dimension. Joel is still stuck in Sweden. The group is breaking up I must go back. My Debt is Paid.
Posted by nicolaisgreat at 22:26