I was interviewed by Cristina Sk for this article in Hong Kong Arts Magazine, Pipeline (2012) "Other Wicked Catalysts" Jan/Feb 2012, p36.


An online issue is available here --- Read the editorial then skip to p36 to read what I have to say.

I am half Chinese-Malay, half Australian and doing a residency in Indonesia. But in Indonesia, I am white. I am a buleh, a western woman. One of my biggest impressions in Indonesia is how they view Western women. We are seen to be so sexually free (with positive and negative attributions). When I was asked to do a performance in the Pendopo Mangkubumen, Universitas Widya Mataram, Yogyakarta. I of course said yes, because it is a beautiful old pavillion and was part of the Kraton dynasty in Yogyakarta. I thought that a 'veiled' ie. non-literal, non-translated performance about sexual identity within an Islamic Institution would be symbolic of how my sexual identity is judged here. I also wanted to focus on the transformative element of taking an autonomous-self-ego ritual and presenting/exposing its broader symbols in the collective unconscious, for in the end, I want to break down the borders and create mutual understanding among us all. In a Western society because of my Asian heritage I am sexualised as 'smart' and 'indie' - the symbol I chose for this is the Melodica (Pianica) and thus Simbi and I chose to expose 12 concepts of masturbation along the 12 notes of the western musical scale - fantasy, paint, thumbs, flowers, chains, asphyxiation, stars, humping, scissoring, water, pressure, knife. The 12 melodicas were hand decorated to each of these themes, and given away to the crowd at the end of the performance.


I am not an overt sexual performer, ie i have never performed naked, other works of mine have cynically commented on sexuality as a lure/desire. this maybe explains my sudden and dramatic disdain at suddenly being seen as a 'slut.' I was not concerned about being seen as a slut during the performance as i consider performance to be transformative. I wanted to open thoughts. The reaction to performance was good and respectful, mostly because we gave away the 12 melodicas. But my biggest impression was on children, we had children come up during the performance and play with the paper stars and throw flowers at us. Plus they were the ones who got melodicas. There‘s hope for change. The children playing along supports the idea of collective veiled sexuality where there are no judgements made and they weren't shouting, “hello buleh“ 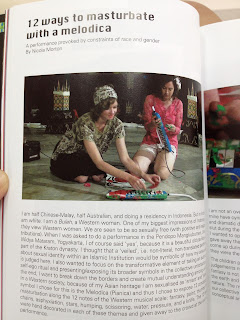