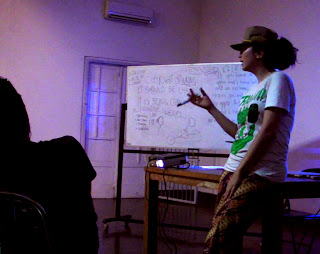 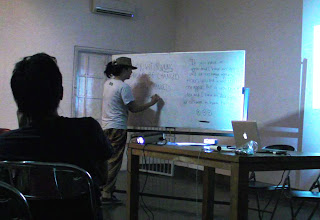 Copyright and (d)evolution
The collective intelligence - mass collaboration could be the next step in evolotuion -  it requires openness, peer 2 peer, sharing, globalisation (overcoming group think and individual cognitive bias) in order to allow a collective to cooperate on one process-while achieving enhanced intellectual performance. Teilhard points to the societal problems and tactics of capitalism such as isolation and marginalization as huge inhibitors of evolotuion. since evolution requires a unification of consciousness. He states that "no evolutionary future awaits anyone except in association with everyone else."
Tentatively Collective Intelligence could help us build civilisation similar to Ian Banks "The Culture" where we are free from greed and material need.
Role play Scenario:
One with traditional system:
One with new system:
Music, art, books, stealing.. eg. DGTMB, Melanie Bonajo and Eddie
Problems with creation because of copyright
Posted by nicolaisgreat at 03:27