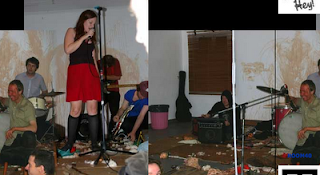 an alternative art space in brisbane called the white house was being curated by jesse sullivan, madeline king and madeline crawley??

on september 16, 2005 i made the opening for Bloodbath an installation/video

it has to do with subverting the traditional role of women as victims and just having fun with lots of fake blood. it was an installation and performance. earlier i had invited some ladies including Jodie Taylor, Leah Emery, and Kate McBean to perform with a bath of blood and props they could bring along for half an hour. The video was recorded and played at the opening the next day.. As you can see we left the space a bit of a mess with stuff on the walls and lots of wreckage on the floor.. at the opening the perfect lovers and botborg were invited to play along with the blood and the video from yesterdays performance. it was a bit of hell to clean up. but people looked like they had fun.
Posted by nicolaisgreat at 08:27